What to Do about Those Bible Passages That Are Hard to Understand? 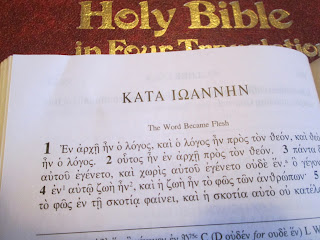 Have you ever read the Bible and found something you could not understand? Something that may have caused you to doubt the consistency or reliability or accuracy of the Bible?

You are not the first.

As Bill was completing his book on images of the Trinity, we came across Jerome’s Lives of Illustrious Men (written in AD 392). Jerome, who lived from ca. AD 348-420, is the church father who revised the Old Latin texts to create the Vulgate. In The Lives I discovered that Jerome mentioned many scriptural difficulties that still puzzle Bible interpreters today, over 1630 years later. For example, Jerome writes that Simon Peter wrote two epistles. But, why does the second letter have a different style than the first (ch. 1)[1]? Who is the mother of James, the half-brother of the Lord? Was she Mary or another woman? James wrote one epistle. But did he really write it (ch. 2)? Matthew composed a gospel. What happened to the original Hebrew version (ch. 3)? Jude, the brother of James, wrote one epistle. Did he quote from the apocryphal book of Enoch, and, if so, does that affect the letter’s authority (ch. 4)? Paul, formerly Saul, wrote 9 epistles to 7 churches and 4 to his disciples (Timothy, Titus, Philemon). But, did he write Hebrews, that appears to have differences in style and language from the other letters, and, if not, who did? Furthermore, why did his name change from “Saul” to “Paul” (ch. 5)? Luke the physician wrote the Gospel and Acts of the Apostles (ch. 7). If Acts of the Apostles is authentic, how about the Acts of Paul and Thecla? Moreover, why are there differences in Jesus’s genealogy between Luke and Matthew (ch. 63)? John, the apostle whom Jesus loved, wrote the Gospel, 3 letters, and the Apocalypse. As an eyewitness, why are there differences between his gospel and the other three synoptic gospels? Also, why are there differences between the Gospel and the Apocalypse and between the first letter of John and the other two letters (ch. 9)?

These are some puzzles that even the early church recognized that still puzzle scholars today. Nevertheless, Jerome clearly sets a boundary between these questions of devout thinking Christians about the biblical canon and conclusions that change the canon itself. For instance, after discussing Peter’s writings, he adds that other books are rejected as “apocryphal” or false: Acts of Peter, Gospel of Peter, Preaching of Peter, Revelation of Peter, and Judgment of Peter (ch. 1). Similarly, he declared the Acts of Paul and Thecla to be apocryphal. The second century Tertullian knew the presbyter in Asia who confessed to be the author of the Acts of Paul and Thecla and, when discovered, resigned his office (ch. 7).

Thus, we can agree with the wise Solomon that there is indeed nothing new under the hallowed halls of ivy (Eccles. 1:9). But we can as well take comfort. As even Apostle Peter said about Apostle (and “beloved brother”) Paul: “There are some things in [his letters] hard to understand, which the ignorant and unstable twist to their own destruction, as they do the other scriptures.” Peter warns his readers that since they are “forewarned,” they not get carried away and lose their own “stability” (steadfastness) but instead “grow in the grace and knowledge of our Lord and Savior Jesus Christ” (2 Pet. 3:15-18 NRSV).

Why shouldn’t there be things “hard to understand” in God’s revelation if these writings have been “God breathed” (2 Tim. 3:16) by the same God who created the universe with all of its marvelous and manifold mysteries? Is not God “hard to understand”? But, nevertheless, God loves us and that is wonderful to receive.

Of course, these biblical puzzles are worth research, even as scientists research the puzzles in nature.

Jerome and others offer many solutions. Did a different person write 2 Peter or did Peter write 1 Peter with the grammatical assistance of Silvanus (1 Pet. 5:12) but without him wrote 2 Peter or did Peter write 2 Peter under more difficult circumstances reflected in his style? Was James’s mother another wife of Joseph, Joseph having married a sister of Mary, also named Mary so Mary, the mother of our Lord, could stay a virgin, or did she consummate her marriage to Joseph and had more children?  Did someone write James’s epistle under his name or did James, the brother of the Lord, write it himself?[2] Today, some think the Greek is too good for a carpenter’s son. Jerome says the Hebrew version of Matthew’s Gospel was preserved in his time in the library at Caesarea and used by the Nazarenes in Syria (ch. 3). Some reject Jude because it quotes from Enoch but others point out that even an apocryphal or noncanonical book might contain some truth.[3]

Many agree with Jerome that Hebrews was probably not by Paul. Gaius, the bishop of Rome, who died in 217, declared that To the Hebrews was “not considered among the Romans to the present day as being by the Apostle Paul” (ch. 59). Tertullian thought it was the work of Barnabas, others by Luke the Evangelist or Clement, bishop of the church at Rome (chs. 5, 15), and since then by Apollos, Prisca, or Phoebe.[4]

Why did Saul become Paul? Jerome thought Saul took the name of the proconsul of Cyprus, the first to believe on his preaching: Sergius Paulus (ch. 5 Lives, Acts 13:7); others think “Paulus” became his Christian name, and others that “Paulus” was simply Saul’s Roman name, helpful as he preached to Gentiles.

Julius Africanus solved the apparent discrepancies in Jesus’s genealogy by citing Jesus’s relatives (ch. 63), who said one genealogy was of Joseph, the other of the levirate grandfather. Others thought the point was to show Jesus as both Priest and King (Epistle of Aristides),[5] and now some state one genealogy was of Mary and one of Joseph.

John the apostle read the other three gospels and “approved indeed the substance of the history and declared that the things they said were true,” but he wanted also to relate “the events of the earlier period before John [the Baptist] was shut up in prison” (ch. 9). Some early church theologians explained the differences between the Gospel of John and the Apocalypse and between 1 John and 2 and 3 John by positing a second John, John the elder, mentioned by Papias. There were two sepulchers in Ephesus, but some said the two memorials were to the same John the evangelist, who lived and died in Ephesus (chs. 9, 18). The Gospel was written by John, the evangelist, while the Apocalypse was a vision given to him (Rev. 1:1), which may be why the style of the two works have differences.

All these puzzles have been researched from earliest times and continue to be researched today. Excellent answers may be found that support the consistency, reliability, and accuracy of the Bible. Some Bible passages may be “hard to understand,” but wise answers are available, and, in the process of research, the researcher can “grow in the grace and knowledge of our Lord and Savior Jesus Christ” and thereby, at the end, all the more praise the name of our awesome triune God!

[1] All chapter numbers are from Lives of Illustrious Men, which may be found in Nicene and Post-Nicene Fathers, vol. 3: Theodoret, Jerome, Gennadius, Rufinus: Historical Writings, etc. Second Series, A Select Library of the Christian Church, eds. Philip Schaff and Henry Wace (Peabody: Hendrickson, 1994), 361-84.

[4] Bill thinks Phoebe, who carried Paul’s letter to the Romans and most likely explained it, may have written Hebrews. Paul certainly esteems her (see Rom. 16:1-2).

[5] Also see Eusebius, Church History 1.7. The Epistle of Aristides is reprinted in “The Extant Writings of Julius Africanus,” Africanus Journal 1:1 (April 2009): 4-6. See Bill’s discussion of the genealogies in that same issue: “A Personal Reflection on the Undisputed Extant Works of Africanus,” pp. 19-29.