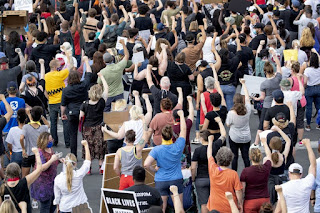 Before God called Aida to study the New Testament and become a professor, she was a social worker, serving as a Community Organizer among Spanish-speaking people in Plainfield, and then with Model Cities in Newark, both in New Jersey. She began working in the wake of the 1967 riots that swept across the United States which victimized both of these cities. In Plainfield, a policeman was savagely stomped to death by a mob of men and women.
The incidents of violence by police and against police are among the fall out in this fallen world. The condition of this world is not one that God intended but it is beset by evil and injustice, although God is still at work in it.[1]
Last Memorial Day, May 25, 2020, George Floyd died during his arrest for potentially stealing a pack of cigarettes. As a result, protests and riots have been occurring throughout the United States. While Floyd was being arrested, the arrest process was filmed not only by the store camera but by bystanders. Bystanders who complained were ignored or told to move on. Since that event, the Minneapolis City Council voted on June 5 to ban chokeholds and to require police officers to intervene against the use of excessive force.[2]
Can we not only film injustice with our smart phones but also stop injustices while they are occurring? That is our recommendation, that every city create a “Floyd Action Team” for help by dialing 119 (or another number). This would not be a citizen review board, but an action team. Every town should have at least several individuals, such as police superior officers, and larger cities a team to oversee accountability of police. A team would have 3 or 5 people who would be called to check a potential situation of excessive police force with the power (by majority vote) to override current action and calm the crowd. They should be able to arrive within 10 minutes. The George Floyd incident lasted 24 minutes from when the first policemen arrived until the ambulance arrived. Concerned bystanders could dial this special number if they thought the police were unresponsive to helpful comments or threaten to do so. The team would also have the power to recommend policy changes to the appropriate local board. They would offer checks and balances, which is a standard feature in democracy. For balance, each team would consist of men and women of compassion and justice, including a representative of the area’s predominant ethnic minorities. The teams could have a police representative, such as a retired police chief or police advocate, a legal representative like a public defender, a retired judge, mediator, chaplain, counselor, or first responders such as emergency rescue person, fire department worker, medical or public health workers, doctor, nurse. The local chief dispatcher would receive the 119 emergency call and immediately contact the 3-5 people already approved for the team on call. Each group could receive the call in their cell phone.
How to organize such a group? Possibly different citizen advocacy groups could recommend someone willing to serve on such an action team, if at all possible for pay, then the individuals could be voted in or appointed by the mayor or selectmen or even public elections. The group would need specialized training by the different appropriate regional groups: police procedure, legal rights, emergency medical help, crowd control, etc. and be in communication with key leaders of the local professional and citizen groups.
Why should the key qualities for the individuals include compassion and justice? Because such qualities are found in God, who created human beings in his image: “the Lord, the Lord, a God merciful and gracious, slow in anger, and abounding in steadfast love and faithfulness, keeping steadfast love for the thousandth generation, forgiving iniquity and transgression and sin, yet by no means clearing the guilty” (Exodus 34:6-7a).
Aída and Bill