In Memory of Them: Mary of Bethany's Recollections before Passover 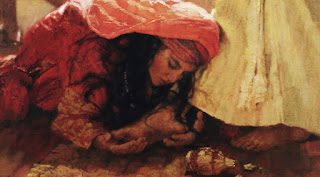 
I knew he was going to die.  He’d told all of us enough times.  But none of them heard or wanted to hear.


That’s why I decided to do something dramatic – to show them all what he was saying.  What I chose to do was certainly appropriate.  Look at all the drama he employed when he acted out his parables!


It was six days before the Passover celebration.  Jesus was coming to our home.  It was a good time to do it.  So, I carefully worked out my plan.  I had some very costly ointment of pure nard from the far, far East, beyond Parthia, from the great mountains of India, about a pound of it given to me as a dowry by my parents before they died.  It was my greatest treasure.  I fished this out of my keepsakes and exempted myself from kitchen duties.  Martha was serving and our beloved brother Lazarus (whom Jesus raised from the dead to the joy and gratitude of all of us) was sitting with him and various friends at the table when I quietly stole in and crouched at Jesus’s feet.  He smiled at me, because I’d often done that so I could listen to his wise teaching – and here I was safe, because he wouldn’t let anyone remove me.


But, instead of simply listening carefully to him in silence, letting myself be enraptured by his thoughts, as any good student should do, I quietly slipped the perfume out of the little leather bag I was carrying and began to pour the entire pound of oil on Jesus’s feet.  Then, unbinding my hair, I began wiping his feet gently with my own hair.


Immediately, the strong fragrance of the nard flooded the house.  Everyone stopped talking and stared at me.


Jesus did not move.  He just looked at me with such tenderness and such sadness.


Then Judas Iscariot broke the moment by suddenly demanding loudly why I hadn’t sold that oil and given the money to him for the poor.  I knew very well the poor that he was talking about!  This same Judas had taken charge of the donations Jesus had insisted the disciples gather and share with the widows and the lepers and the blind and lame beggars, but I, for one, had been suspecting all along that Judas had been stealing it.  His look was so avaricious when he was railing at me that you’d think everyone would have noticed it, but some of the slower on the uptake disciples began to rally around him – when Jesus cut Judas off sharply.


“Leave her alone!  For the day of the preparation for my burial she has reserved this.”  And then he lectured them all, “The poor, miserable beggars you will always have with you, but you will not always have me.”


They were stunned and no one reprimanded me further.


Four days later, a woman none of us knew showed up at Simon the Leper’s house and, to everyone’s shock, anointed Jesus – also with costly nard, perhaps following my example, though this time she anointed his head, not his feet, as I had done.


And, then, can you imagine?  The disciples repeated Judas’s complaint, rather than Jesus’s counsel.  So Jesus had to repeat his correction another time.  He told them once again, “Don’t molest this woman. She is preparing me for my burial for I am about to die.”


Nobody is going to forget her actions, or Jesus’s kind words of forgiveness, though Judas’s harsh words will blow away like the chaff they were.


People had been gossiping that I did it because I was grateful for Jesus raising my brother – or, some suggested, because I was in love with him and not in the way that I and all of us in my home were.  Then they wondered if this other woman had anointed Jesus because Simon hadn’t done it – just the way Simon the Pharisee hadn’t anointed Jesus and a prostitute had even dared to creep into his house to pour costly oil on Jesus’s feet, just as I had done.


But I knew these were all signs from God.  Each of these women had felt an urging and responded just as I had done.  His head and his feet were now anointed, a symbol of the spices and unguents we would use to prepare him at death.


Jesus had revealed by now that he was not only the Prophet of Nazareth, as many now called him, but the fulfillment of prophecy and, also, as well, the priest who was interceding for us and who was about to perform for us the greatest sacrifice of all – giving his life as the ransom for many.   And, he was telling us he was indeed the true king of Israel, prophesied in our Scriptures, the one who would be our suffering redeemer.  All these truths he was revealing to us as he explained to us and everyone these strange actions we women felt compelled to do for him, for we were symbolizing what he had been telling us all along; to give us life, he had to die.