A Front Seat at the Bloopers' Parade 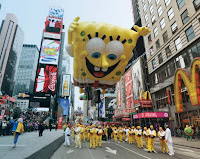 Different places where we’ve lived have built their identities around different celebration days. Growing up in New Jersey, we knew July 4th was definitely parade day.  That was pounded in our earliest memories by those booming high school band drums, resonating in the pit of our stomachs as we hung enthralled on our mother’s hand. Nearby New York, of course, televised the extravaganza down Wall Street known as “Macy’s Thanksgiving Day Parade.”[1] In Louisville, Kentucky the big day was Pegasus Day, to celebrate the Kentucky Derby. These days we have to vacate our store-front church on the main street in Beverly, Massachusetts by noon if we want to avoid the traffic snarl that is the colorful Santa Claus Parade, when local merchants can bean you from on top of floats if your eyes aren’t peeled for incoming candy, peppering the sidelines like hail.     But nothing beats the circus that is Salem on Halloween.  Trading on its reputation, Salem draws thousands of sightseers to its “Haunted Happenings” events, replete with “Horribles” parades when kids dress up like the undead and all the doo-dad shops have their curio occult action figures, witch tee shirts, and other Samhain-knock-off junk on sale at special prices.  It’s sometimes hard for Christians to remind ourselves that October 31st is actually Reformation Day and handing out candy to little kids in Disney match-product outfits is really celebrating one of God’s great days and not just warding off spooks with bribes.
Associating Halloween with horror is especially true for those of us who teach in the cities around Massachusetts Bay, because October is the month when the first round of student papers come in.  Don’t get us wrong.  We love our students and teaching is delightful – we’ve been doing it long enough now (in both our cases on and off since the late 1960s),[2] but we can both verify that no teacher on any level we ever met likes grading.  The horror of piles of student papers can easily quell the ardor of any who venture into this noble profession without a true calling.  You pour your little heart out sharing the treasures of knowledge, laying out your assignments with the care and caution that an explorer would when explaining the traps and dangers of a misstep on a map to King Solomon’s mines and what happens?  Boom!  How many students stumble right before your disbelieving eyes into some embarrassing boffo, yawning like a pit of inattentive doom beneath their unwary feet.  Of course, many of these are avoidable, if they just paused and proofed their work.  Over the years Bill has noted a few of these bloopers as a caution to other intrepid students on the road to theological knowledge, and here are a smattering like Juju trinkets in an old Tarzan movie, warning all to check our work carefully, we who would enter here.
So, here’s a starter received a few years ago in Bill’s Systematic Theology #1 class on a term paper practically applying the loving kindness of God to human interaction: “If I teach this in Sunday school.  I want to teach through four weeks of Bible Study.  Through this Bible Study, I want my church members to learn and practice lack of forgiveness and mercy.” Bill replied to this student, “It won’t take you 4 weeks to teach your people to be unforgiving and merciless.  Those ‘talents’ are natural.”
But, there’s plenty more misguided piety where that came from like: “Christians disobey the word of God faithfully.”  (And do they also sin devoutly?).

On historical notes:
“Antemomian tendencies.” (Bill had to point out, only Adam was ante mom, being the only human who didn’t have one.)
“Because of sin God cast both of them out of his presents.”  (No Christmas stocking stuffers for them!)
“Adam the man plugged the world into sin and only a sinless man could redeem us saving us from the sting of death and restoring us by robbing us in his righteousness.” (Can’t trust anybody these days?)
“[God] also entrusted Adam to bare a nation of people, who would conquer sin through obedience.” (This must be commentary from Nudist Colony Bible: e.g., “As people were fruitful and multiplied, the production of fig leaves could not meet the market demand.)
“Moses could only handle seeing a smart part of God’s glory without it killing him (Exodus 32:20-22).”  (Bill had to ask: “Are you speculating there was a dumb part that would have finished him off?”)
“God set aside cities of refuse.” (Where Israel could recycle all its garbage?)
“The awful/terrible storm arose; it was so strong that boat has began to shrink, and the Professional Fishermen were very concerned/alarmed with a sense of desperation.” (By this time, they must have all been standing on one foot in the center of the boat, wondering how small this thing was going to get!)
“[Jesus] slept in a moving sheep (Mark 8:24) and he was tired when he walked for along time (John 4:6).”  (The jostling by that peripatetic sheep must have kept waking him up.)
“The Council of Chalcedon declares that scared things and humanity are in the same personality.”  (Yes, reading this paper, your professor has been feeling a bit of free-floating anxiety himself these days…)
“[God] made it so that the church will exist in the church.”  (Makes sense, otherwise the church would be nowhere…)
“During an interview conducted by a group of Christians at Boston common regarding Jesus divinity, many being interviewed believed that Jesus was a massager sent down from God.” (Sort of like a personal trainer?)
“The characteristics of the youth at risk within the city: the following is the list of a couple of traits.  *Teens in their middle to late teens. *Most are males (the females too).”  (So that’s why the girls are so tough!)
“We are it children, and we are the chosen of living Father.”  (If all of us are “it,” how do we play?)
“God is the hop for the future.” (The future just being a hop, skip, and a jump away.)

The following students may have skipped lunch to work on their papers:
“The death has wined all human being from the first man Adam” (and dined us, too.)
“[This paper] will compare and contrast Christianity as a belief system of grace and Islam as a religion of woks.” (Can one fit surahs in fortune cookies?)
“The Baha’ism believe that salivation is something that could be done by the cooperative contributions of both human and God.” (Sort of like a divine/human gourmet cookoff?)
“Jesus is the perfect gift of God to human beings for salivation.” (“Taste and see that the Lord is good?”)
“More over we can’t find faith in infants because they are not conscious of the salivation process.” (But they eat heartily just the same.)
“We need to sustain our salivation every day until we reach our destination.” (The Great Food Chute in the Sky?)
“[Satan] knew Jesus was angry after forty days of fasting.  (Where’s the beef!!!)
“Christ was made fresh and was God.” (Sounds like the next day there was a day-old Christ sale…)
He paid the rice for us to rise from the grave.” (That would have put salvation on the barter system.)
“How should we respond individually and corporately to clams of divine healing?”  (Serve them on the half shell?)
“All Christians and churches have to confess before God that we are ‘greed’ like a fig.”  (But, thank God, not as bad as a pomegranate?)
“The Westminster Lager Catechism” (only recited in beer halls).
“In short, the beginning of MAÑANA, Dr. González gleans on a vast amount of material, which relishes on the hundreds of encounters and discussions with Hispanics from all walks of life.” (Hot dogs, anyone?)
“The Israelites were delivered out of slavery and God allowed them to experience His omnipotence by making them wonder the dessert for 40 years.” (And not only wondering about dessert, but often unsure where the next main course was coming from…)

On practical matters:
“The treasure time of prayer is ‘Saebuk Gido’ which stands for early morning or darn prayer.”  (as opposed to late night or goshhangit prayer?)
“To Israelites, while Gentiles are enemies to kill, and they are the object of hospitality.”  (We can do this hospitality thing the easy way or the hard way…)
“Preaching sermons on omnipotence of God and how the bible say He will never forsaken us for a series of three months.” (After that, we’re on our own?)
“They urge everyone to seek the Lord together individually.” (whichever works.)
“The periscope fits in the overall of the letter.”  (So, the rest of the submarine must be in the subtext?)
“Jesus was born into a family in Bethlehem and grew up in Nazareth just like any of us.” (I myself grew up on the Street of the Spitting Camel, right next to the Falafel shop.)

On theological matters:
“Is it wrong for a woman to receive sperm from a woman who is not her husband?” (Is it even possible?)
“Jesus was the substation for our sins.” (His heavenly Father was the main line?)
“The Son (who came forth from Him and taught us these things along with the lost of the other good angels who follow are made like him).” (If they ever locate these missing angels, maybe cable TV can star them in a sequel: “Lost 2: The Celestial Island.”)
“And also Luke 4:41 says that all creation know that he is Don of God and Christ.”  (Who’s Don?  And what happened to George Burns and Bruce Almighty?)
“And without the death of Christ dying on the cross I would be free today of my sins.” (But he died, so I’m not?)
“Jesus died on the cross for our sins and rose from the grave that me might be saved.” (“Me saved, Tarzan – you, too?)
“The birth actually happened and Jesus dwelt among mankind and took on human nature with sinning.”  (C’mon!  There were so many fish in the Sea of Galilee, Jesus never cheated on his income tax!)
“Sanctification is the process in which nouns are made holy so that they may be pure and blameless in God’s sight.” (Is there no hope for verbs?)
“God is just means that He administers his decree fairy without showing favoritism or partiality.” (Sort of like the tooth fairy but with more muscle.)
“There is neither Jew or Greek, there is neither bond or free, there is neither male nor female: for ye are all on in Christ Jesus.”  (So, get on wid’cha good self!)
“In Revelation 20 there is the discussion of the thousand year rain.) (When that happens, plug in the sump pumps!)
“The Bible is the Word of God and it has no error.  Everything written on it is correct and true.” (From the Gospel of Thomas to Rudy Bultmann to the boys in the back of the Jesus Seminar, it’s all good???)
“Professor William Spencer Trust says in his systematic Theology 2 lecture notes, ‘Trust the Bible and do not fear scientific inquiry.” (A Trust we can trust.)
“Also there are numerous biblical support in the Newt Testament.” (A salamander’s-eye view of religion.)
“Bultmann’s prose is dense and often elusive.  However, this little boob outlines his related approaches to Biblical interpretation and theology.” (That’s why we’ve assigned the twerps and twits to tackle his philosophy and applications.)
“John Calvin uses the same passage to emphasize the Divinity and Eternity of the World in his INSTITUTES.” (Wait a minute! Calvin didn’t read James Lovelock with his Gaia hypothesis and Carl Sagan with his eternal universe. They wouldn’t be born for 5 more centuries!)
“As Arminius, I believe that to be able to reach the salvation we have to persevere until the end.”  (As Calvin, however, I would disagree.)