Getting Lost as an Art Form 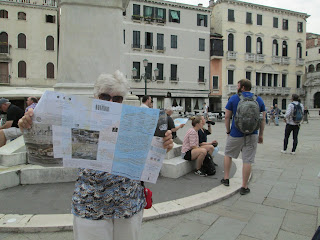 Up until Venice, getting lost had been Bill’s unique familial distinctive.  Spatially challenged with a minimal sense of direction, Bill had compiled a number of defining experiences (like managing to lose his way on the final day of 4 years commuting to college) all together convincing him never to consider wilderness guide as a career choice. Such incidences, especially in his earlier years, had deeply troubled his dad – and why not? Bill’s father, gifted with Leni Lenape Native American heritage, was accustomed to disappear each November, often with Bill’s grandfather, roaming the farmlands and deep woods around White House, New Jersey down near the Pennsylvania border and living off the land during small game into large game season until they could rumble triumphantly back to civilization with a buck tied across both fenders of their hump-backed car. The family legend was that Bill’s dad could be dropped into any woods and find his way home over the leagues with the unerring accuracy of a faithful hound in a classic Disney movie.  All that prowess was so evidently missing in Bill that one day his exasperated Father took him to a crossroads and asked which way they should go to reach a destination. Bill puzzled it over and made his choice. His dad processed his unerringly and routinely wrong answer, regarded him sternly for a long moment, and then issued these life changing words of advice: “When you get to a crossroads, always look up and down both ways carefully. See which way feels right to you. Then go the other way.” Ever since, Bill has taken that advice to heart. One might say it is one cross Bill has been forced to bear, when, of course, he can locate it…
Now, all this was true until Venice.  In Venice, he was finally vindicated.

To keep the record straight, there have been places he and Aída have explored over the years that have been constructed to mystify invaders and leave even harmless sojourners with a sound sense of direction wandering hopelessly.