The Movie "The Star" Shines Brightly 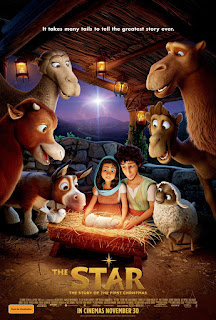 Bill and I were delighted to see The Star in DVD finally last week. It was released November 2017. The film is sweet-spirited, paced and aimed for children, but fun for adults, too. It is the story of the animals who came to be by the manger in the barn at Jesus’s birth: a donkey (Bo), dove (Dave), sheep (Ruth), three camels, and other charming animals. The story begins with the angelic visitation to Mary and ends with the Nativity of Jesus. Some of the themes highlighted by producer DeVon Franklin were God’s plan, faith, serving God and others: “Christmas is about what we give to others.” The producers (Sony’s Affirm films, Walden Media, Columbia Pictures, Jim Henson C., Franklin Entertainment) close the story with the explanation: “While having fun and taking some adventurous artistic license to tell the story, the filmmakers strive to remain true to the values and essence of the greatest story ever told.” Thus, for example, listeners will see the Magi arrive in Bethlehem at the same time as the shepherds. Instead of having Herod massacre the infants in Bethlehem (Matt. 2:16-18), that event is symbolized by an executioner and two snarling dogs who pursue Mary, Joseph, and the donkey. Nevertheless, and most important, Jesus is called the Messiah and Son of God by the wise camel.
We were pleased to see a film with some humor, not aimed at the story of Jesus, but presented by the meek and humble animals. For example, one camel confused “the King of the Jews” with “the King of the Shoes”! Especially powerful was the transformation of the assault dogs, reminding us that as Christians we should be ambassadors for Christ entrusted with the ministry of reconciliation (2 Cor. 5:17-20).
The music is excellent, especially renditions of “Can You See,” “the Star,” “His Eye Is on the Sparrow,” “We Three Kings,” and “O Holy Night.” The songs were well placed to further the narrative. The cartoon characters are olive-skinned and thus more likely to be racially like Joseph and Mary. The actors are multicultural as well.
Indeed we have found that The Star’s filmmakers promoted the Christian values: what is noble, right, pure, pleasing, commendable, and worthy of praise (Phil. 4:8). The animals around Jesus may not have been a silly group of characters, but these animals portray some of the silly things that we simple humans do.
Aída