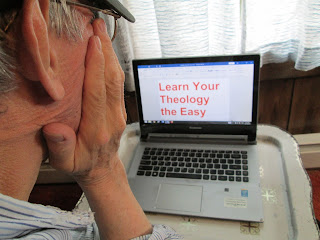 One night after a week of spending hours waiting on the telephone waiting for our server to be repaired and then a new one installed, I had the strangest dream.
I was a seminarian attempting to enroll in a program called: “Learn Your Theology the Easy and Cheap Way with the EIS.” It was one fifth the cost of any school in the Northeast. The monitor explained, all I needed is a computer, an internet, and a willing heart!
Easy Internet System (EIS) had reviews. I decided to check them out. There were only two.
(1)  “I loved EIS! I didn’t have to take any notes! All was recorded for me! As a matter of fact, I painted all my toe nails purple while I listened.” Sharmaine
(2)  “Save your money! EIS is a sham! Better read a book. Ten viruses attacked my computer and it cost me hundreds of dollars to fix.”
Ernest
This all sounded hopeful, so I charged my card $500 and began!
“Are you a current customer or future customer? Punch 1 for future; 2 for current.” I punched 1.
“What language do you want? Punch 1 for English; 2 for Spanish; 3 for Mandarin; 4 for Dutch.” I punched 1 for English. This whole process was easy, and I remained hopeful.
“How much can you read? Punch 1 for elementary level; 2 for high school; 3 for college; 4 for master’s level; 5 for doctorate; 6 for ‘I don’t know’.” I punched 6. I had a GED high school equivalency and a few college level courses. Where do I fit?
“What do you want to study? Doctrine of…? Punch 1 for God; 2 for Jesus; 3 for the Holy Spirit; 4 for the church; 5 for end times.” I punched 5 for the end times. I wanted to ask what “doctrine” meant, so I then typed out “question.” I got “Quest Axis”—an advertisement for new wheel bearings for the Axis truck with the model “Quest.” I didn’t have a truck, so I tried to get back to a page in my EIS class, but my computer indicated “no internet.” I then had to spend an hour with my internet server fixing the connection problem. When I got back on to the EIS site, the computer wanted me to pay $500 again, but, of course, I couldn’t do that! I called them up, but they were open only from 9 a.m.-3 p.m., so I had to wait overnight. When I called the next morning, at first the robot voice wanted me to pay, but I kept yelling “agent!,” “agent,” and “operator” until I got a human voice on the telephone. To show they were an institution with integrity, the representative moved me on to the first page of my class: “Are you a current or future customer?” I repeated the same set of questions until I got back to “end times”! (I still had not learned what “doctrine” meant, but I was hoping to learn.)
The next question was, “Who is the Antichrist? If you think it is the Pope, press 1; the archbishop of Canterbury, press 2; the current president of the United States, press 3; the past president of the United States, press 4; the next president of the United States, press 5; your favorite TV nondenominational evangelist, press 6 three times; or other, press 7.” I thought the Antichrist was my next-door neighbor, so, I pressed “other.”
Next, I was asked, “when is Jesus coming?” That is a good question and I wanted to know! “Press 1 for it is none of your business!; 2 for the year 2020; 3 for after the tribulation; 4 for before the tribulation; 5 for after you get your raise and can build a swimming pool; 6 for after you finish this course.” That was a hard one. I deliberated for a long time between 6 and 5 with 4 coming up as a back up choice. Before I knew what happened, the question timed out and a repeating line raced across my screen in a different font saying, “clean-up needed in aisle 666,” “clean-up needed in aisle 666,” “clean-up needed in aisle 666”… That was a puzzler. But, eventually, I guessed the computer must have cleaned-up aisle 666, because we moved on: it was the end of the first class.
To finish up, EIS had a quiz for me for my first grade. I was so enthused. If I was getting a grade, then I knew I was progressing in my knowledge of theology! But I no sooner began to read when I noticed that my computer had frozen! I began hitting every possible icon I could find on the computer. With no results, I turned it off and then turned it back on and got on my site again. Again, EIS wanted to charge me $500, but this time I got the robot voice on the phone who helped me get back on. When I got back to the final quiz, I saw that I had failed it because it was timed to complete in 5 minutes, and I had been gone for an hour!
At that I woke up in a sweat and looked around at the darkened room and realized it was all a nightmare and I was now free from EIS! It was only a dream! I still had my $500 left. Whew!
I got dressed and resolved to give my students more personal attention, remembering that it takes a person communicating with another person to teach God’s truths to other trustworthy people who will then be able to pass them on to others (2 Timothy 2:2). I was determined to give more personal attention to each and every student I had. And I wanted to make sure that I always treated the internet as my helper, not my master. And I remembered what John Arbuckle said, you get what you pay for!
Aida