What My Mom’s Hesitation Taught Me About Women Leading 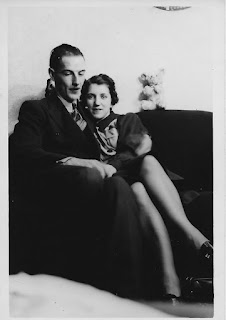 On a clear and sunny day, my dad, a painting contractor, was three stories up on a wooden ladder, painting the top of a sidewall of a house. Suddenly, the rung he was holding snapped and he plummeted down all three stories onto a macadam driveway. He was all smashed up. Unconscious, he was rushed to the hospital. The surgeon told my mother he wanted to remove my father’s left leg and left arm. They were too destroyed to be of use if he recovered. Through her tears, my mom said, “No. He will never forgive me. And he will use them again.” She knew my dad had an indomitable will.

For many months he was in the hospital, as the surgeons slowly pieced together his hand and leg the best they could in a series of operations. Then followed several years of physical therapy before he could use them to go back to work and rebuild his business.

I remember my mom and I standing on the porch before a friend’s door as she cried about what to do. I also remember they did not invite us into their home. Maybe they thought catastrophe was contagious

My mother broke my dad’s heart when she told him she was going back to work. They were fundamentalists and women were not supposed to work. But what could she do?  The year was 1956. If there were any kind of governmental support system, she was unaware of it. I was 8 years old, the only remaining child (my older sister having drowned two years earlier on a playground trip to a pool and the rest of what would have been my siblings were stillborns).

My mother had worked in retail before she married and she found a job in a nearby city at Bamberger’s department store (eventually added to the Macy’s chain). She excelled and was named “an ambassador,” the store’s highest award for success in sales. Rejoicing with my mom, I said, “Now you can get a big raise!” That was the moment she explained to me that men were the wage earners and women always earned less as a result.

I was shocked. I already had an incipient logic and a child’s clear sense of justice, so I blurted, “But that’s not fair! You work harder than anyone and do the best job selling!”

My mom just repeated that men were the wage earners and my plea, “But you’re the wage earner now!” didn’t permeate the perspective she’d been taught. That was the day my consciousness began to raise and I first glimpsed the pervasive inequality I would learn besets this fallen world.

Over six decades have passed since that perspective-changing conversation with my mother. Since then, I have been told of countless instances of women stymied by artificial limitations placed on their self-image and on their capabilities.

It’s bad enough to learn about inequity and the disenfranchisement of women in the fallen world. But it is doubly reprehensible when we hear about it happening in the church of Jesus Christ.

This incident of manifest contradiction of my mother’s refusal to admit the implications of her own excellence in the face of the limitation inculcated into her consciousness by fellow Christians came back to me quite recently when I heard from a mainland Chinese friend that a wave of young Christians, trained in a conservative seminary in the USA, have been invading Chinese house churches, confronting the women who planted them and who pastored them for many years. These young zealots are insisting that the Bible demands these women must relinquish leadership and men must lead in their places.

How contradictory such a present action is from the honor given at the same time today to the trailblazing Chinese Bible Women who served so diligently as “teachers, interpreters, Bible readers, and evangelists.” Ruth A. Tucker and Walter Liefeld record that Bible Women were “employed by organizations to carry out evangelistic work. The British and Foreign Bible Society, for example, in 1913, had in its employ thirty-six Bible women hired specifically to distribute Bibles and literature.”[1] Missionaries who often worked closely with them are exemplified by the renowned Southern Baptist missionary Charlotte “Lottie” Moon, whose impact on Chinese society and on the status of women and children was matched by her advocacy to promote the status of women missionaries. Lottie Moon fearlessly preached to Chinese women, children, men and boys. An inspiration in the organizing of the Southern Baptist’s Women’s Missionary Union, she “was an egalitarian when it came to women’s service in Baptist life,” and, despite opposition in her time, overwhelming support has preserved her memory both in fact and legend.[2]

Janette Hassey in her excellent historical study No Time for Silence, Evangelical Women in Public Ministry Around the Turn of the Century points out that Dwight L. Moody recruited famed temperance leader Frances Willard to tackle Boston for the gospel with him. Dr. Hassey notes, “When asked to preach by Moody one Sunday afternoon, Willard wondered if that might hinder the work among conservatives. Moody retorted ‘it was just what they needed.”[3] As one result, Moody Bible Institute’s Moody Monthly “listed Lottie Osborn Sheidler as the first woman to graduate from the Pastor’s Course, in August of 1929.”[4] For a called and gifted woman to pastor was obvious. Even before that, in 1889, Louisa Woosley was ordained by Nolin Presbytery of the Cumberland Presbyterian Church (CPC). Opposition halted her reception, but faithful service and persistence saw her received as a minister by the CPC in 1911, making her the first Presbyterian woman ordained.[5]

In 1894, responding to the removal of “a young lady missionary [who] had been appointed to give an account of her work” from the speaking roster of a convention, due to the “strong” “scruples of certain of the delegates against a woman’s addressing a mixed assembly,” so that “further public participation in the conference [was] confined to its male constituency,” A. J. Gordon published in The Missionary Review of the World his classic defense for “The Ministry of Women,” wherein he explained, “the purpose of this article is…to justify and vindicate both its propriety and authority by a critical examination of Scripture.”[6] This he not only accomplished, but practiced his convictions since he and his wife, Maria Hale Gordon, had already partnered with other couples to found the Boston Missionary Institute, the foundation of today’s Gordon-Conwell Theological Seminary,[7] where both Aída and I are privileged to teach. Clearly, both Arminian and Calvinist evangelicals have recognized the prior gifting and calling of women by God and responded by ordaining them long before today, following the example of the ministering women Paul extols in Romans 16.

That there are eager young voices today whose mission seems to have been deflected into interrupting the gifting and calling of others by God is absolutely heart-rending to me. I’ve read incessantly many arguments for and against the ministry of women and we and our colleagues  have responded with our own biblically-based explanations of how God intends women and men to partner together in ministry in our House of Prisca and Aquila book series with Wipf and Stock, Publishers with such books as Christian Egalitarian Leadership: Empowering the Whole Church according to the Scripture, which is our latest book at this writing, as well as Global Voices on Biblical Equality: Women and Men Serving Together in the Church. Both of these books contain thoughtful, well-researched chapters by scholarly women and men addressing these issues with evangelical Christian perspectives from a variety of cultures. One of my favorite books on mutual ministry is KeumJu Jewel Hyun and Cynthia Davis Lathrop’s Some Men Are Our Heroes: Stories by Women about the Men Who Have Greatly Influenced Their Lives, a very positive book.

In short, someday, each of us are going to have to stand before our Lord God and account for how we used our time on earth. When it’s my turn, I want to bow down humbled to the ground before the Lord and whisper, “Lord, I tried as hard as I could to empower 100% of the church to use the gifts you gave to assist you as you reconciled the world to yourself.” I don’t think I would be able to report, “Lord, I did everything in my power to make sure that 60% of the church were never allowed in leadership over any males over the age of ten. And, Lord, when I didn’t have anybody who could do a job but a woman, I made certain she didn’t get any title or credit for it.”

[1] Ruth A. Tucker and Walter Liefeld, Daughters of the Church: Women and Ministry from New Testament Times to the Present ( Grand Rapids, MI: Academie/Zondervan, 1987), 340.

i.Regina D. Sullivan, Lottie Moon:  A Southern Baptist Missionary To China in History and Legend (Baton Rouge: Louisiana State University Press , 2011), “Southern Biography Series,” ed. Andrew Burstein. For a helpful review, see Chuck Warnock’s “The Real Lottie Moon” at https://chuckwarnockblog.wordpress.com/2011/08/11/the-real-lottie-moon-story/. When my wife was earning her doctorate in New Testament at Southern Baptist Theological Seminary in Louisville, KY, between 1978-1982, I remember visiting a room in the SBTS ibrary where Lottie Moon was honored among other evangelical leaders.

[3] Janette Hassey, No Time for Silence, Evangelical Women in Public Ministry Around the Turn of the Century (Grand Rapids, MI: Academie/Zondervan, 1986), 33.