The Movie Paul: Apostle of Christ: “If they persecuted me, they will persecute you” (John 15:20). 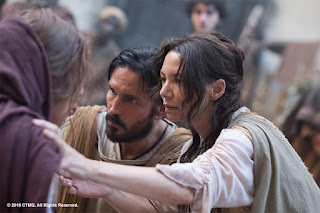 "Luke" and "Priscilla": http://www.paulmovie.com/site/videophotos
Paul: Apostle of Christ is a powerful depiction of the central biblical themes: “where sin abounds…grace abounds more” (Romans 5:20) and “love is the way” (cf. 1 Corinthians 6:14).
The story, set in A.D. 67, works out the conflict between peace and violence on both macrocosmic and microcosmic levels.  As it pits the murderous excesses of Nero’s government against the commitment to follow Jesus’s command to love our enemies (Matt 5:44) by the small and terrified Roman Christian community, James Faulkner’s Paul, suffering in Mamertine Prison,[1] seeks to atone for his own violent past against the very thing he has become: a pacifist Christian.
The go-between is Luke (see 2 Timothy 4:11: ”Luke alone is with me”), Paul’s chronicler and a gifted doctor, ably played by Jim Caviezel, who also co-produced and is renowned for his portrayal of Jesus in The Passion of the Christ. On this note, Paul: Apostle of Christ is a serious adult treatment of persecution, appropriate today when “There are more persecution victims living on almost every continent in the world today than ever before,”[2] and this film is not too far from The Passion of the Christ, so it is not for small children. (It is rated PG 13.) There are no miracles here, just forgiven people trying to live out Christ’s love ethic in an oppressive world gone mad under the homicidal maniac Nero. This film is well-researched and pulses with authenticity.  It captures the humanity of the early church in exemplary fashion.  Even the idol worshipers are sincere people, struggling to be good within their understanding, but the film leaves no doubt that they are sincerely wrong and part of the problem, not the solution.  This is not a syncretistic film.  The Christian community is committed to love (one of the best scenes is Paul’s reflection on 1 Corinthians 13), and that is its struggle.  Women are portrayed well, praying and speaking in public, and Prisca and Aquila share leadership (though Aquila longs to take the Christians to safety under Timothy’s church in Ephesus, rather than to their traditional real-life villa, under which is a catacomb, outside of Rome).  Under pressure, the Christians can shout at each other and blame themselves for blunders, but their commitment not to return violence with violence, sorely tested, vindicates their faith in the film’s stirring ending.
Andrew Hyatt, Sony, Affirm Films, Giving Films, OOB Films, Mandalay Pictures have together produced a thoughtful and responsible movie that is well worth watching, pondering, and taking to heart.
Bill and Aída

[1] See our blog: “What to See in Rome for Bible Students.”
[2] Godfrey Yogarajah and Roshini Wickremesinhe, “Evangelicals and Religious Liberty” in Evangelicals around the World: A Global Handbook for the 21st Century edited by Brian Stiller, Todd Johnson, Karen Stiller, and Mark Hutchinson ((Nashville: Thomas Nelson, 2015), 120.
Posted by Aida & Bill at 12:32 PM