Joining the Emmaus Walk: What Are the Old Testament Prophecies about Jesus’s Life? 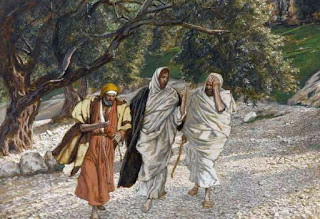 “Looking sad,” Cleopas and a companion “were going to a village called Emmaus,” outside Jerusalem, three days after Jesus died and the day he had just resurrected from the dead, discussing what had recently happened. Jesus joined them, listening, and finally “said to them, ‘Oh, how foolish you are, and how slow to heart to believe all that the prophets have declared! Was it not necessary that the Messiah should suffer these things and then enter into his glory?’ Then beginning with Moses and all the prophets, he interpreted to them the things about himself in all the scriptures.” When Jesus left them, “they said to each other, ‘Were not our hearts burning within us while he was talking to us on the road, while he was opening the scriptures to us?” (Luke 24:13-32 NRSV)

Wouldn’t we have loved to be along the road to Emmaus as Jesus disclosed to Cleopas and his companion “all the writings, the things concerning himself” (Luke 24:27)? Jesus revealed to them where the Old Testament stated that the Messiah must suffer before entering into his glory (v. 26). But, since he interpreted all the writings about himself, very likely he included information on his birth and life. What might those passages have been?

Jesus’s ministry is foretold as early as Genesis 3:15, as the offspring of Eve who would “bruise” the “head” of the serpent, while the serpent’s seed would bruise his heel. This passage is hinted at in 1 Timothy 2:15: Eve “would be saved through the Child-bearing,” most likely the child born of Mary.[1] God’s sovereign care of humanity oversaw the covenant line for thousands of years in order to grant that humans could be reconciled and reunited with the Lord of the universe by means of Jesus’s birth, life, death, and resurrection.

Specifics about Jesus’s birth were prophesized in the Old Testament:

What are we to make of all these prophecies?

Christmas and Easter are special times. The Christ who was born over 2000 years ago is the culmination of victory over the serpent:

“a child born for us, a son given to us; authority rests upon his shoulders; and he is named Wonderful Counselor, Mighty God, Everlasting Father, Prince of Peace” (Isa 9:6 NRSV).

Today we too are invited to come and hear and learn from Jesus our God who was born as a human, but who now lives as our mediator and teacher, healer and provider.