We Rise to Salute "Risen" 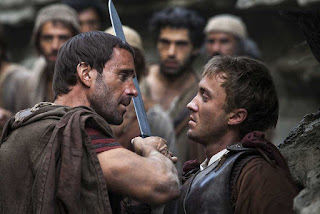 “Hail, Caesar!” tells you how to live as a Christian, while “Risen” brings you to faith.
Colombia, LD Entertainment, and Sony’s Affirm Film’s “Risen” is like an ancient detective story, in particular a police procedural. The Tribune comes in after the murder has taken place, in this case an execution. His first task is to keep order. It looks like an open and shut case. Then comes the first twist. His superiors suspect there will be foul play to the body. Now the detective sets up his security detail to make sure this doesn’t happen. When it does, the hunt for truth begins. He starts with subpoenaing witnesses, shaking down the truth out of them as best as possible. The Tribune is given a hypothesis by his superiors, the priests and the prefect. So now we have a classic mystery: there is an uneasy peace, then there is a disruption of that, then a hypothesis of what happened, then there is a hunt for the culprits, then the detective realizes things are not as they seem. The inspector has to change his hypothesis to restore order and that changes his life.
Like the best of the hard-boiled mystery stories, this account is very gritty and very realistic, far more realistic than many other stories of the ancient world, even “Gladiator” and “Eagle.” The whole movie is portrayed in greys and tans, stony, dusty and dirty. You feel like you have dirt embedded under your fingernails when you exit the theater. Like the protagonist Jake in Chinatown, our detective gets an injury, in this case a busted lip. This he carries through the whole account. The robes look like they have not been washed for weeks. The hand to hand combat appears quite accurate, with an effective use of the Roman shields as a “turtle.” The battles are violent but the gore is left off-screen, unlike “The Passion of Christ.” The search for Jesus’s body among rotting corpses was probably an historical accuracy that few of us have imagined. So, the realism is more like in some European films, rather than in American ones, where ancient days are often stylized.
There is a decided lack of women in the film. There are only two that come in as witnesses. Mary Magdalen is considered a former prostitute (a mistaken reading of Luke 7 and 8). A blind disciple, named Miriam, appears, but no others. “Risen” is a manly movie. Here there is no overly spiritualized Jesus who needs to be helped out of the boat, as in Zeffirelli’s “Jesus of Nazareth.” The story begins with a battle, is gritty throughout, and focuses on the men. It would be ideal for a Promise Keepers gathering. Nevertheless, women too can be attracted to the inviting Jesus and to some powerful scenes (the effect of God’s presence upon the Romans, from the centurion at the cross to the guards at the resurrection to the Tribune himself confronting his subordinate) and to the quest for truth. These are outstanding instances of movie making.
In contrast to the Romans’ severe, ego-centric, avaricious ambition, Jesus and consequently his eleven disciples are relaxed and loving. Jesus welcomes all: “There are no enemies here,” he assures the Roman Tribune and us viewers. The Tribune repeats this and it symbolizes the love of God counteracting violence.
While “Risen” is not for small children, it will put you there in the ancient world like few movies on Jesus have done. Through skillful use of symbolism, consummate writing, directing, acting, and producing, this film will leave you at the end identifying with the Tribune, working out your own salvation with fear and trembling because the Son of God is at work in your midst.
Aída and Bill