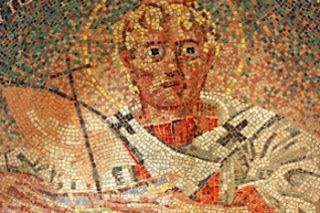 Many years ago, while visiting Disney World, we saw an advanced release of the movie Ernest Saves Christmas. Near the end of the film, Santa Claus explained that he owed allegiance to a Power higher than himself. Unfortunately, that sentence was removed from the final released version of that movie. Nevertheless, that one sentence exactly places Santa Claus in his correct schema of things. Santa Claus is an image of One greater than himself and the real Saint Nicholas knew that fact.
The real Saint Nicholas was a bishop in Myra of Asia Minor, current day Turkey. As a bishop, he would have been a devoted and genuine believer in Jesus as Emmanuel, “God is with us” (Matthew 1:23). Bishops or elders were overseers over the spiritual life of a Christian community. In the earliest times, each church had several “bishops” or overseers, such as at Ephesus (Acts 20:17, 28) or Philippi (Philippians 1:1). They were to “shepherd the church of God” (Acts 20:28; 1 Peter 5:2). Although most bishops were men, a few were women, such as Theodora. A bishop was to be “temperate, sensible, respectable, hospitable, an apt teacher, not a drunkard, not violent but gentle, not quarrelsome, and not a lover of money” (1 Timothy 3:2-3).[1]   Nicolas was known for his generosity, which made him “hospitable” or a “lover of strangers.” When his Christian parents died and he received his inheritance, he used it to assist the needy and the sick. For example, three young girls of Patara who could not marry because they were poor could have been sold into slavery. But Nicholas tossed into an open window three bags of gold so they could use them for their dowries. Once, when he was returning from a pilgrimage to the Holy Land, a mighty storm threatened to wreck the ship. Like his Lord Jesus (for example, Matthew 14:22-33), Nicholas calmly prayed. The terrified sailors were amazed when the wind and waves suddenly calmed, sparing them all. That is why Saint Nicholas became known as the friend and protector of all in trouble or in need, especially of children and sailors.
Saint Nicolas personally begged Emperor Constantine for lower taxes for his region because the high taxes were causing much hardship in Myra. Constantine granted a reduction that lasted at least two centuries. Jesus too was concerned for the needy and the sick both when on earth and even now.
During the early years, many bishops had to suffer for their faith. Nicholas not only gave generously from his own possessions, he also was imprisoned because of his belief in Jesus during the reign of the Roman Emperor Diocletian. Nicholas was later released and possibly attended the Council of Nicaea in A. D. 325, where he defended true doctrine about Jesus being fully God as well as fully human.
Saint Nicholas is known as a gift-giver and that ability to give gifts comes from God. Jesus’ brother James explained to Messianic Jews that “every generous act of giving, with every perfect gift, is from above, coming down from the Father of lights” (James 1:17). Jesus even today gives to the church gifts of ability in prophecy, evangelism, shepherding, and teaching to help equip believers for service to others (Ephesians 4:11).
At this time, when we celebrate God’s gift to us of Jesus, the Savior, we do well to remember that Saint Nicholas points to One greater than himself.[2]
Aída
[1] All Bible quotations are from the New Revised Standard Version.
[2] For further resources see www.stnicholascenter.org; catholic.org/saints; Rebecca Benson Haskell, The True Story of Saint Nicholas (Chambersburg, PA: Alan C. Hood & Co., 1997); Adam C. English, The Saint Who Would Be Santa Claus: The True Life and Trials of Nicholas of Myra (Waco, TX: Baylor University, 2012).
Posted by Aida & Bill at 1:03 PM